My most successful side project happened when Windows Phone 7 came out.  WP7 was actually pretty good, and I wanted to get in on the ground floor of its app market.  So I did, with an evolution of the drawing apps that I'd done for the Zune HD. 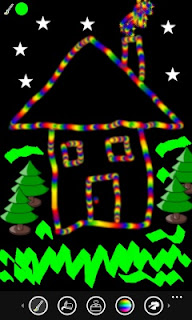 I called it Draw Free! (well, the first version was called Draw! but that was back when I had an illusion that people might want to pay for it), and it had a pretty sweet interface that could adapt to different ages of user.  It was all written in Silverlight with all drawing (stamping, alpha blending, image processing) done on the CPU in C#.

With Windows 8 I rewrote it in XAML and using SharpDX, which allowed me to use shaders (!!!).  This version was eventually ported back to Windows Phone, and is in fact still available.  On Windows 10, search in the Store for "draw free".

Honestly it's a good app, and over the years has just above 2 million downloads.  I got messages from kids all around the world, and people sent me some amazing stuff they did with it.

I also made an app called Face Warp that did live video manipulation to make silly faces and stuff.  It was done almost entirely using LUTs (on CPU, in C# in Silverlight!).  My favorite was a Geordi La Forge mode that also unlocked an easter egg in the settings menu: